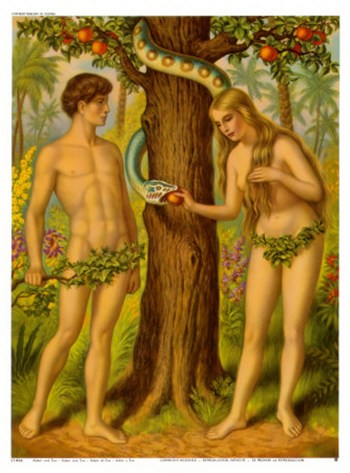 One argument used against homosexuality suggests that because the first couple was heterosexual, then all future couples were also intended to be heterosexual. There are some inherent problems with this argument: If the first two human beings were the pattern God intended, and any deviations from that pattern are contrary to His will, then we must, following the same logic, also conclude that anyone who is not the same color as Adam and Eve (whatever color that may have been), or does not have the same color hair or eyes, would also be contrary to God's will. When we start talking about "right" skin color vs. "wrong" skin color, we all know we are on dangerous ground!

But let's look again at our first parents, Adam and Eve. A lot of what we have been taught about them, about the garden, about the fall, is based more upon tradition and medieval paintings than on scripture. (How many of us know that the Bible never said the fruit they ate was an apple?) A careful reading of the Hebrew text will reveal some surprising things about this couple to us.

The scripture tells us that God made man out of the dust of the ground. This first man is known to us as Adam, but Adam was not originally a proper name. Adam, more properly spelled with a small "a," is nothing more than the Hebrew word for human being. So God created adam אדם (ah-DAHM), a human being, out of dust. The human being was placed in the garden of Eden. Also in the garden were the animals God created, and the human being gave them all names. The world order was different then: Because there was no sin, there was no death, and because there was no death, there was no need for any procreation. (If the animals had been reproducing in an enclosed garden, and nothing ever died, there would soon have been massive overpopulation.) The man also gave a name to himself, different from the word adam that God had called him. Adam called himself אנוש "enosh." This wasn't exactly a proper name either, but meant man. (Enosh is the oldest form of the name. In biblical and modern Hebrew, this word has become  איש "ish.") Proper names were not needed due to the fact that there was only one of him, and only a limited number of animals. (If there was only one tiger, one tigress, one lion, one lioness, etc., they could be called by those names; other names were not needed.)

God said that it was not good for the adam to be alone (Gen. 2:18) and went on to say "I will make a help meet for him." (King James Version) But what the Hebrew says here, and the manner in which God made this "help," tell us volumes about the creature He was about to present to the man. The words translated as "help meet" are  עזר כנגדו E-zer k'NEG-do. The word עזר "ezer" means "helper." But there is more to it than that. You see, Hebrew has no neuter gender; every word is either masculine or feminine. Most nouns referring to people have both a masculine form and a feminine form, like "actor" and "actress" in English. Ezer is masculine. The feminine form would be עזרה ezrah. But God didn't say He would make an ezrah. He used the masculine form, ezer. The second half of this, כנגדו k'negdo, means "as opposite him," that is, as a mirror image.

The way in which God created this helper is also significant. He could easily have taken some of the same dust from which He made the adam, and formed the helper out of it. Instead, we find that He took a rib from the man and made the woman from it. This is very significant. From what we now know about genetics, we can understand what God did: Although it sounds frightening to say it, the plain fact is, God cloned another "adam" from the rib. Because the new "adam" was made from the first adam's DNA, she was genetically identical to him in every way. (Was Eve also called Adam? In Genesis 1:27, the Hebrew tells us that "adam" was made both male and female. Genesis 5:1-2 tells us the same thing, and that their name was called "adam.") When God made this new person, Adam called her אנשה "inshah," which is simply the feminine form of enosh. It means "woman." (Biblical and modern Hebrew: אשה ishah) But we know from modern cloning experiments that a clone cannot have a different sex than the original. Therefore, the woman would have actually been no different from the man. (Remember that there was no need for reproduction yet.) The response of Adam when he met the woman for the first time confirms this. Think for a moment back to when you were a child, and saw another child of the opposite sex naked for the first time. Undoubtedly, you noticed "the difference." And yet, the difference between naked boys and naked girls is minimal when compared with adults, where the "difference" is much more pronounced. And yet, when Adam saw his new wife for the first time (and remember, he had never before seen a human female), he did not say "What are those things?" or "Why is she missing the parts below?" If there were a physical difference, he would have noticed it immediately. Instead, he recognized her as "bone of my bones and flesh of my flesh." He knew that she was his counterpart, his mirror image. He gave her the feminine equivalent of his name for himself.

The need for procreation came about as a result of the fall. Because of sin, there was now death, and with expulsion from the garden, there was a whole world to fill. All of creation now needed to reproduce. Having children was part of the curse placed on the woman. Translating from the Hebrew, God told her, "I will surely multiply your sorrow and pregnancy: In sorrow you will bear children, and your desire will be toward your man (literally, toward your enosh), and he will rule over you." So we see that pregnancy, bringing forth children, was not part of her original state, but was part of the curse. So if childbearing were not part of her original design, then she would not originally have needed those parts of the body associated with bearing and nursing children. (It is also probable that her husband lacked parts associated with reproduction prior to the fall as well.) What is clear is this: Prior to their sin and expulsion, the man and woman were alike, equal, and appeared to have no physical differences from each other. Their DNA was identical. They were not heterosexual in the modern sense of the word, because there was no sexuality of any kind, nor any difference between sexes. In fact, the only difference evident in scripture before the fall was grammatical: They were both adam, but he was enosh, she was inshah. The difference served only to point out which "adam" was being spoken of. (For example, a lion and lioness: if they were originally physically identical, the different titles would serve only to indicate which big cat you were speaking of, and would not reflect any physical difference.)

After the fall, when the changes took place, which actually affected the whole world order, Adam gave his wife a new name. (These changes included diet: before the fall, no animal ate another.) When Adam realized that his wife would be bearing children, he gave her a name that reflected her new status: He called her Eve (Hebrew: חוה CHAV-ah - "living"), because she would be the mother of all the living. So we see that prior to the fall, she was not a mother, she was not Eve, and physically, she was not even female as we understand the word. So one of the first consequences of sin that came into being was heterosexuality, required to replace those humans and animals who died. But in addition, homosexuality came into being, to prevent overpopulation in the world. A percentage of well over 1000 animal species are homosexual. (source: "Biological Exuberance: Animal Homosexuality and Natural Diversity" by Bruce Bagemihl, Ph.D.) Although it was sin that brought this into being, it was nevertheless God who designed the new order that resulted from our sin. His new order for creation included sexuality, absent from the garden, and included the orientations we know today.

QUESTION: Wasn't the command to "Be fruitful, and multiply, and replenish the earth" (Gen. 1:28) given before the fall?

ANSWER: No. It is important to understand that the first chapter of Genesis is an overview of all creation, and includes events both before the fall and after the fall. Chapter two then goes back and tells the story of the creation of man in more detail, including the specifics of the fall and the expulsion from the garden.

So how do we know which events in chapter one were after the fall? Simple logic. Prior to the fall, man and the animals were in the garden, a space enclosed by four rivers. This brings up two important points:

1. In the absence of death, it would make no sense whatever for God to command anyone or anything to reproduce in an enclosed space. The rats and rabbits alone would have overrun the place in a matter of months, if not weeks!

2. Notice that the command given to man was to "replenish the earth." (Better translation: fill the earth.") But prior to the fall, man was in the garden and didn't have access to the whole earth, so they could not possibly fill it! Clearly this command was given after the fall.

Oops! This site has expired.

If you are the site owner, please renew your premium subscription or contact support.